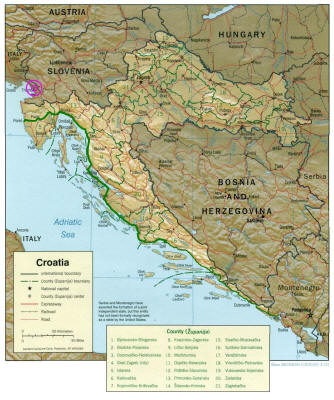 The road to Croatia goes through a few short kilometers of Slovenia. Enough distance to fill up with fuel and do some shopping using Euros. There are borders. You have to slow down just in case some-one wants to stop you and that's it.

It took only a few days for us to fall in love with the Adriatic coast. The water is a deep blue to turquoise near the shore. It is just below body temperature, clean and very clear. The drawback is the stony beaches. We do not have the proper wet shoes. We're looking! The land is also very stony with not much top soil. Not much good for growing crops.

Most people that we  deal with speak English though they prefer German as the majority of tourists come from there.

So far we are staying in camp sites. Prices tend to be higher than what we have paid up to now. They are everywhere, in every tiny little cove, 2 or 3 in every town. Tourism is big business here! Wild camping is possible but never near the water.

The towns can be very pretty with several walled medieval ones. We have not been inside any yet as they seem very touristy. The ports, which are every where, contain some seriously large expensive yachts as well as smaller versions down to the rubber dingy. I think everyone living on the coast must have a boat of some sort.

In Rijeka we finally had the exhaust fixed! Tourist information gave us the approximate position of an 'auspuh' mechanic. A bit like the German 'auspuff' with the same connotations for me.  It took over an hour to find by which time he had closed for the night. The next morning we went back and he just wasn't there. I phoned without much success. Luckily a neighbor phoned him speaking Croatian. He eventually arrived, cut off the flanges from the exhaust and welded two new ones in place. Exactly the correct way of fixing the problem. We were on our way again by lunchtime.

Besides just enjoying the warmth we have 'seen' a few things. Such as the Sea Organ at Zadar. It is made of pipes and whistles set in the stairs leading into the sea. The waves push air through these creating deep tones that have the same rhythm as the sea. Occasionally there is a higher note. Interesting to listen to. While we were listening to this music and enjoying our iced coffees we watched a large fire some distance away being put out by airplanes. They managed to douse the fire in quite a short time. Of course the whole operation reminded Pieter of an aerial bombing raid!

We took the road over Pag Island to go from Zadar to Trogir. The island is very barren in the north. Even so there are long stone walls demarcating large areas. Presumably for animals although we couldn't see any. What would they eat? There are very few shrubs and no grass. The southern part had some soil in the valleys which was cultivated. Here stone walls were obviously used to prevent erosion as well as for demarcation. 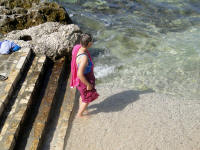 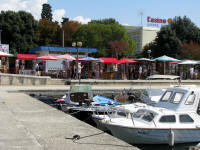 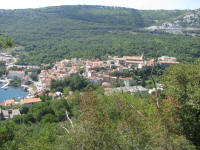 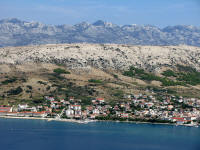 We spent a few days at Trogir at an ACSI campsite. Expensive but it had everything including wifi. That is where I spent time getting the website up to date. Trogir is a medieval town which is supposed to be lovely. Unfortunately parking is a huge problem so we gave it a miss.

It was also difficult to find parking in Split but we lucked out and literally drove into a parking area without realizing it. It was only 5 minutes walk to the city centre. Split's claim to fame is Diocletian's Palace. Diocletian (245 -313 CE) built a fortified retirement home here on the water's edge. His palace took up a quarter of the fortified area. Much has been destroyed but plenty remains. Life goes on in and around the Roman structures. The Old Town itself is a vast open air museum. The main buildings have been Catholicized.  Diocletian's Mausoleum is now a church with an ornate altar and columns. The Temple of Jupiter is now graced by a statue of a rather scrawny John the Baptist. I enjoyed walking around the Old Town taking in the ambience of life among old buildings. 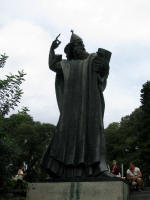 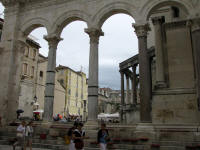 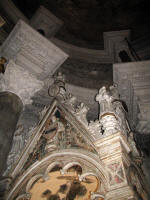 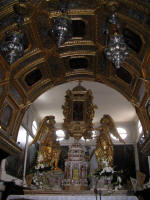 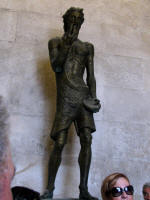 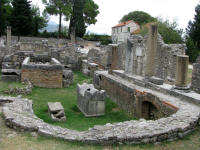 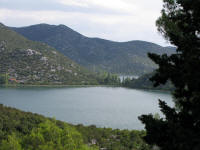 Salona is a nearby Roman settlement that was evacuated in 614 CE. It is hardly worth a visit. The photo shows the entire set of ruins that are open to the public.

Much more interesting was the area around Ploce. It has a combination of rivers, lakes and mountains. Then the fertile plain comes with its many water channels. Presumably it started as a marshy area which is why the Romans and Slavs didn't settle there. Besides larger fields there are small home vegetable gardens. There are actually a lot of home vegetable gardens in Croatia in front gardens.

The road to Dubrovnik goes through Bosnia and Hercegovina. It takes 10 minutes!

Yes! It is as awe-inspiring as the tourist guides say. There is plenty to do and see. Boat trips, museums and exhibitions. Everything is set up for the tourist. The buildings have been restored after the earthquake in 1667and then again after the bombing by the Yugoslav army in 1991. It is pristine. People are still living there - proven by the washing hanging out of windows. There are hotels and many apartments available. The complex is surrounded by a high wall. These days people live up there. In older times there were small churches over the entrance arches. Once it shook off Venetian control in the 14th century it became a wealthy trading nation lasting 5 centuries.

We wanted to stay at the campground right in the city but the price was exorbitant even for low season. Another 6 kilometers down the coast is a campsite with all the facilities at half the price. We took the public bus from here into town. The bus let off half the passengers at a stop and we all looked at each other in confusion. Where to now? Someone saw the sign pointing to the Old City and off we all trooped. Down hundreds of stairs from the top of the hill to the bottom. It really wasn't so bad and we decided NOT to think about the climb back up. The ambience is that of a holiday city. No-one is in a hurry. There are plenty of maps available and many more restaurants, ice-cream parlors and snack bars. Everything is priced at market value ie. high because tourists will pay. Even so we meandered around stopping for an iced coffee then a drink and just soaking it all up. Eventually we stopped for lunch of 1 portion small fried fish and 1 portion salad. More than enough for the 2 of us. The well fed pigeons and cats enjoyed our left-over fish. The only 'sight' we went into was a show highlighting Croatian dancing followed by a 3D show on the history of Dubrovnik. I had decided I wanted to see this very early on. By the time we got there it was 2pm and half price. Not bad. One task to be accomplished was to replace some of Pieter's tablets. What better place than the third oldest functioning pharmacy in Europe, in operation since 1391.

When it was time to go back to the campsite we asked Tourist Information if there wasn't an easier way to get back up to the bus stop. Actually we didn't have to go up at all. The bus came along a one way street just outside the city walls. Bliss! We waited for a few minutes and a bus turned up - very full. Even so people tried to push on. Eventually the bus driver shouted at the last few on the steps to get off. We didn't even try to get on. The bus drove off for all of 50m and then broke down! It took 15 minutes to maneuver it onto the side of the street. Not only is the street one way, there is only 1 lane for traffic. Parked cars take up the rest of the width. There were some very irate drivers. Most of the passengers caught a different number bus and a special bus was sent for the rest. The next bus for us didn't take long to arrive so the delay for us was OK. 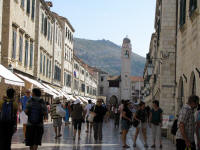 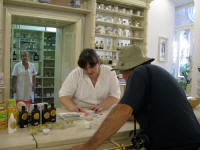 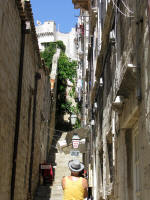 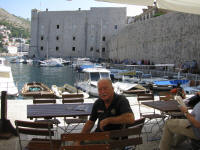 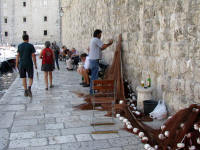