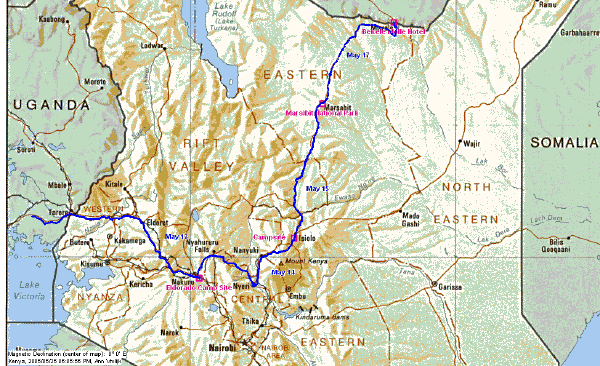 Today our Ugandan visa expired and so we crossed the border into Kenya. The border crossing was very efficient and because we asked for a 7 day transit visa we did not have to pay road tax.

Kenya is a different country that shows its colonial past. It is organised, small properties are fenced, roadside stalls are grouped together and there are commercial farms. The drivers are more careful and obey the rules. The roads are not bad with only a few holes, however there are huge ruts in the road created by the large trucks.

We stayed at the Eldorado Lodge for the night serenaded with loud music from the bar and the barking of the dogs locked up in a small cage!

Today we crossed the equator  because we headed northeast across the rift valley to Nyahururu. We have crossed the equator twice before on 16th April near Lake George in Uganda and yesterday in Kenya, but there were no tourist spots for an appropriate photo. The general scenery was green and hilly especially climbing in and out of the rift valley.  On one side we went up from 1141 meters at the border to 2830 meters, then down to 1691 meters, up to 2576 meters and finally down to 1256 meters at Isiolo. 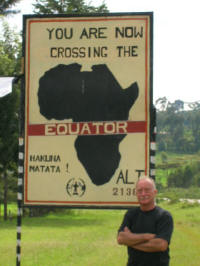 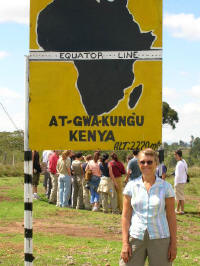 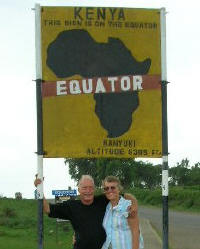 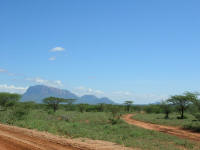 We left the tar at Isiolo for the 2 day trek north. Today we covered 250 km on nerve-wrecking gravel through the Matthews Mountains and plains beyond. There were the occasional trucks carrying sheep and goats and people. We saw small herds of camels, (dromedaries to be exact) for the first time, but generally very few people or animals. We stopped in an isolated spot expecting to have a peaceful lunch as had happened yesterday only to be joined first by a herder asking for water and then 3 others also asking for water!

We spent 2 nights at Camp 1 at the Marsibit National Park where the ablution is minimal, but the site itself is fabulous: lush green with shady trees and adequate fire wood to enjoy romantic nights all by ourselves. Beside catching up on the washing we were entertained by our visitors 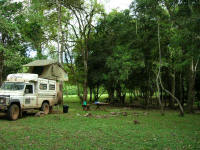 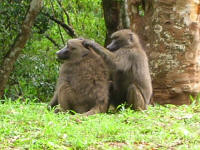 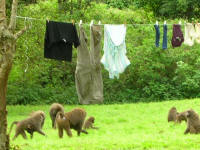 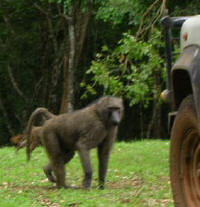 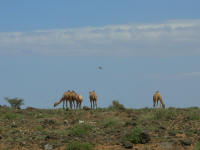 Another day of intense driving that requires constant attention and allows little opportunity for landscape-viewing. The area we travelled through was basically acacia (thorn tree) bush which although green because of the rains, became scarcer as we traveled north. We did see quite a few dikdik (small bokke) running across the road and the oblong wattle and daub houses of the Samburu. We crossed the border with minimum hassle and spent the night on the Ethiopian side of the border camping in the grounds of the Moyale Bekele Molla Hotel. And we only lost a cup, a glass and a tyre that was damaged already in Johannesburg four months ago but brought us well over half of a continent until it finally collapsed.