The drive from the border was our last time in the desert for a while, so we took it slowly. In Agadir the car went through an extensive service and is back to performing beautifully. What a pleasure to shop where many of the European luxuries are to be found - steak to fry, brie and cream cheese with garlic and onions anoung others. We went on a spending spree. 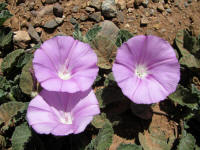 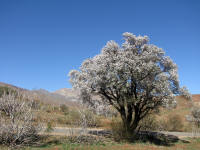 Spring is in the air and the trees are flowering. The weather is so much better than in November and December.

Paradise Valley lives up to its name. The road follows a stream with exceptionally clear water falling over yellow rocks through a narrow gorge. The road is tarred and campervans can easily navigate it. Hence the myriad of restaurants and souvenir shops along the road. Still it was very pleasant to sip coffee while listening to the birds and water.

In Taroudant Pieter bought a pair of leather shoes to augment his sandals. That's right he has only had one pair of sandals for months! They are very well made and should last for quite a while. The on through Tizi n Test in the High Atlas mountains.  'Tizi n' stands for a pass through the mountains. It was quite spectacular in places.

And once again to Marrakech which we like very much. 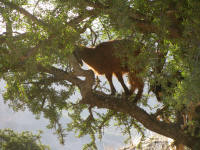 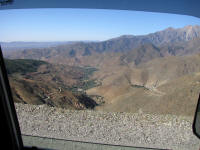 Several times through the High Atlas.  The first stage was south through the Titzi-n-Tichka pass to Ouarzazate. There were lovely narrow green valleys with interesting villages where houses are made from mud brick. Some have been abandoned and are in ruins. It takes about 20 years to turn an abandoned house into a pile of dust.

The second stage went north through the Dades Gorge. We still couldn't go straight through to Agoudal but had to go east to Ait Hani. This is the road where we got stuck in the snow going west. The snow has all gone! What can I say about the gorge except WOW. The valleys get really narrow but still every available space is cultivated. Then it gets far too narrow even for that. The river twists and turns, sometimes it almost (within 100 meters) makes a circle but a high rock wall (at least half a kilometer) stops it. You have to experience it to really appreciate how awesome it is. 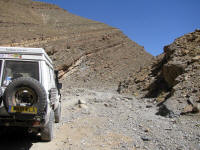 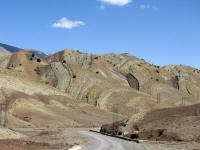 The last stage was heading east through the Middle Atlas to Middelt. This area is not so spectacular but still beautiful. The colours in the rocks on the mountainside are amazing. There are wide stretches of cultivated fields. The rivers have been cleared by machine and the residue piled up beside it. This is used by the farmers to replace the top soil. Many of the fields have already been ploughed and planted. Lots of hard work has been done. The rivers have been flowing strongly and swiftly in many places washing away parts of the road or just undermining it. Repairs are in progress. And the snow is still there in some places. Enough to make the wind icy.