The Land Rover had started once with the help of a 24 volt battery in a truck, but not again. Pieter spent days trying to find the problem without help. According to hotel management Udomxai had no auto electricians who might have been able to identify what, if any damage had been done by the 24 volt battery. I spent my time doing very small household chores and reading. The internet was atrocious precluding loading the website or anything else that took time. Power outages didn't help. Pieter tried to contact SA Land Rover by e-mail as well as a service centre in Thailand without much success. Eventually we met an American couple Damon and Khamthoune Butts who knew someone who might know someone who could help. They did and the next morning Chit came with an assistant, spent the day sorting out the problem, fixed the computerised regulator and Lo! the car ran. What a relief. Another day stowing and securing everything and we were finally on our way.

During this time Pieter also took the back bin off the van for easy movement into a container. The contents are now spread out on the bed. That's our excuse for not sleeping in the van. In any case it is much to hot. 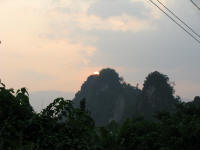 Drove near the tops of mountains looking down to the valley over 500m below and across to the hazy, lush vegetation on the other side going on into the distance. 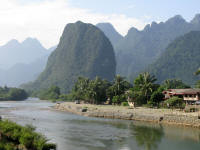 Through magnificent hazy kast mountains to the plains and Vientiane for lunch.

Through a very easy border crossing and a flat well maintained road. Unfortunately there were no money exchange services and Thailand does not exchange Laos Kip!! Maybe we will go back one day.

It took us an hour to find hotel. We only saw 2 signs that said hotel in English and could not actually find the hotels. Eventually we were led to one by a Thai woman. Still no English sign saying 'Hotel'  though.

We spent the afternoon having the Land Rover checked by a Land Rover agent, basically for the brakes and turbo charger, neither of which were working properly. These were easily fixed but it took all afternoon

At least there were signs saying 'Hotel'. 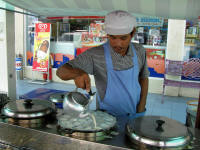 The Flying Dutchman was reborn. We flew past Bangkok, past the town I had expected us to sleep in and on down the peninsula. The engine stopped! We phoned Land Rover in Phuket and emphasized we were 500 K north of them but could they help somehow. They were on their way they said. During the next hour I managed to discover the name of the closest large town to the south. I phoned the manager's cell phone. He only then fully understood that we were 500 K NORTH of Phuket not in Phuket! And no he was not on his way to us. Now what! At least there were small roadside restaurants. The one we approached phoned a mechanic and within half an hour we had help. By this time it was almost dark. He fixed the starter motor and off we went for all of 5 k. This time the engine stopped at a police checkpoint. We were pushed down a side road for the night. The stuff on the bed was dumped on the floor and we had our moving accommodation back - sort of. At least we could sleep.

Next morning a mechanic arrived, sent by the police. He agreed with Peter that there was a problem with the generator. He charged the battery so we could get to an auto-electrician 3 k down the road. The regulator in the generator had burnt out. They had other generators which were stripped to give us the required parts. This took most of the day so we only went the few kilometers to the next city. We both needed a break and really did not feel like driving a long way. We stopped at a hotel overlooking the sea. Wonderful!

Are all problems fixed? We sincerely hope so.

A long trouble free day travelling about 650k through unexciting scenery on good roads. There was a lot of rain leaving large expanses of water on the ground. Some almost into houses.

We stopped at the first hotel we saw in the port near KL, Klang It will be so nice not to be chasing kilometers. We have been driving for a week with 1.5 days off for repairs, not exactly relaxing!

The week was spent organising for the car to be shipped to SA. Then extracting the money from the bank. It is always a problem obtaing large sums of money. I expected some hassle but not all the effort it actually took. First the shipping company did not take credit cards because of the high amount of credit card fraud in Malaysia. After many phone calls to SA and lots of help from the bank in Malaysia we established the reasons I could not use my credit card at a bank either. Malaysian credit cards have an extra chip so you have to go to banks that read my 'old' technology card. Then the bank employees are not aware of how to obtain authorisation for foreign cards because they don't normally need to do this. Once this was all established the bank phoned their authorisation department, who phoned Masrer Card International who phoned ABSA in SA. Unfortunately this phone line was always engaged! No queue, no hunting line. Eventually we gave up and started to withdraw the maximum from the ATM - daily. This took 5 days! The last withdrawal was scheduled for Monday but we could only see Pieter Frank on Tuesday. In the end I flew out Saturday evening leaving Pieter to complete the financial side andfly out Monday evening.

The car was loaded on schedule on Saturday before I flew out.

Of course the SA army changed the rules and we will only be able to see Pieter Frank on 3rd December before he ships out to the Congo!!!!

Back to China - Hong Kong, Tibet and Beijing

Next to South African Hiatus