After 2 weeks in Johannesburg, rushing around to finalise the finances, we finally headed west on Monday morning after first collecting our Zambian visas in Pretoria. We spent the night in a layby somewhere in Botswana on the Trans Kalahari Highway. This is an almost dead straight road from SA to Windhoek. Our sleep was constantly interrupted by the frequently passing trucks who felt the need to toot hello! At least they provide roadkill for the vultures and birds of prey. 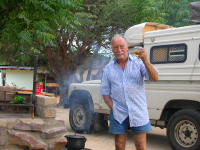 Pieter has decided to carry a beer glass around the world. We will take a photo of it in each country. Hopefully we will eventually take a photo of it back in South Africa. The beer glass is along the lines of the calabash carried by Kingsley Holgate in his adventure "Following the invisible line - Capricorn". The only difference is that the glass will be filled with beer to be drunk within the hour. Kingsley Holgate filled the calabash with sea water from the east side of a continent (or island) and tipped it out on the west side. The book is a great travel adventure tale.

I had always thought of Botswana as dry, however it was covered in green  grasses which waved in the wind like a choppy sea. The trees and shrubs became less frequent the closer we came to Windhoek. We found out there that this was the rainy season and during the time we spent in Windhoek it rained, sometimes furiously. We had to put up the sides of the tent to provide some dry space. 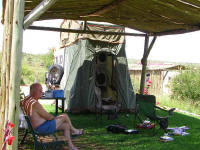 We tried out all the campsites in and near the city. The first night was spent at Daan Viljoen where we have camped happily on our other trips to Namibia. What a let down! Firstly it was very expensive and secondly the ablutions have gone to seed. The next night we spent at Arebbusch, in town on the main road south. It is reasonable, almost in town and has new, well kept facilities. The downside is that it is on the main road and the traffic noise is always there and it can be flooded out. The weekend was spent at Monteiro. This is just over 10ks south of Windhoek near the main road. It is a piece of paradise. There are new ablutions, grass, shade and some distant traffic noise.

We spent this time in Windhoek trying to obtain Angolan visas and sort out the connections between the new pocket PC, GPS and laptop.

We are not going to Angola. We had tried to obtain visas in Pretoria and were told that they did not want us to go where there were mines and then have to notify our families. In Windhoek they refused to give visas to non Namibian residents. I guess if your coming south no-one minds but just to visit seems not to be allowed. The pocket PC still cannot connect to the GPS. We have e-mailed both HP and Garmin about this. The problem is that Garmin do not have good maps of Africa, only USA and Europe. So we need an external device that takes maps. The laptop has the software (Touratech QV3) but is heavy and rather too large to have in the cab. The pocket PC is to use in the cab and then upload to the laptop using PathAway. The salesman assured us the HP iPAQ would connect to the Garmin and as we were in a hurry we did not ask further questions and assumed it would be easy. Silly me!

We headed north on Tuesday afternoon turning off the main road at Otjiwarongo towards Outjo where we camped just off the road again. This time we were out of sight of the road and there was very little traffic in any case. Wednesday we headed for Sesfontein. We followed two other landys for a while. The road dipped and rose time after time and watching the landies in front of us was like watching a merry-go-round. At Sesfontein we stayed at an old German Fort called Fort Sesfontein. It sounded great but the men's ablutions were disgusting and it was expensive. We decided that next time we would first inspect the facilities before we stayed anywhere.

From Sesfontein we decided to travel the long way round to Opuwo, taking two days instead of two hours. The scenery was magnificent, with mountains and valleys. Again there was a green sheen from the grass and the further north we went the more trees there were, mainly Mopani. We had to cross the Opuwo River 4 times in all. There was running water and it was always a challenge to find the track on the other side as each car went a different route across it and the road had naturally been washed away. in fact the whole road was in a bad state of repair, something unusual for Namibia where gravel roads are usually very well maintained. Thursday night we stopped just past Puros. This is a village at the first crossing of the Opuwo River. Although it is not on the map it has many rest camps, a traditional Himba Village and a shop. The area we stopped at was dry desert and the silence was absolute. There were no birds or animals at all. A magnificent evening. 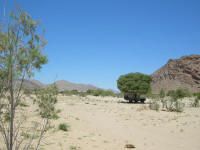 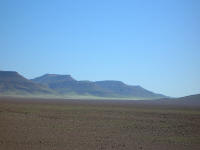 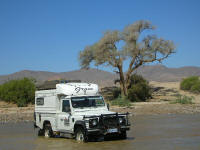 Friday we saw a few animals as the further north we went the more vegetation there was. There were some herds of springbok, giraffe, sable antelope and ostrich.

We also met a man whose donkeys had wandered off 3 weeks ago and was only now looking for them as he had been busy on the farm. He found them again within the day. 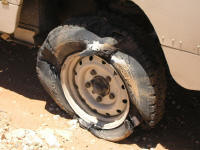 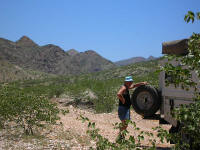 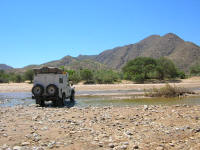 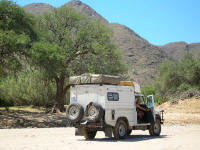 Opuwo is a thriving centre that is obviously growing as there is a tar road being constructed from the main road. It has an OK plus two internet cafes. We didn't check our mail though as we were expecting an internet cafe at Ruacana. There were quite a few Himba and Herero women dressed traditionally walking in the streets. The Herero women wear victorian style dresses with lots of petticoats and a headdress that has 'horns ' at the front. The Himba women wear thin strips of animal skin hanging from their waist and use clay to style their hair. Some of the men also wear traditional Himba dress i.e. an animal skin flap in front and back. It is accepted as quite normal by the general populace.

We wild camped again and then went on to Ruacana. We were very happy to be off the bad road before Opuwo although this road went through flat territory. It must have relatively more rain in the north as there were crops of corn as well as the usual mixed herds of goats and sheep. Some houses were also constructed of brick with tin roofs. The last few days the houses we saw were typically made of tree branches packed with mud (wattle and daub in Australia).

Ruacana turned out to be much smaller than expected. It has a BP garage, a hotel, a camp site, a guest house, a supermarket and a school. There are quite a few houses though and evidence that it was once much larger. The Sunset Lodge campsite is grassed with lots of shade and clean, working facilities. I am having the washing done by Sarah from the Guest house, just what I needed.

It also has two half starved young cats. After all the comments from Pieter about Colleen Behrmann feeding stray cats, I could not resist taking a photo of him doing the same. He also made sure they had 3 meals a day while we were there!

The road to Oshakati is fairly good. It is a delta region and there is, relatively, a lot of water available. The wealth of the region shows in various ways. The houses are no longer wattle and daub, they are made of cement brick, there appear to be at least 6 bars in any group of 10 buildings and there are car wrecks everywhere. Some are gathered together in spare parts businesses, but there are still plenty left lying by the side of the road or in riverbeds where presumably they were washed into by a flood. We spent some time at an internet cafe in Oshakati retrieving mail and then went onto to Ondangwa, a town 35k away and on the main road. We expected it to be larger than Oshakati but it was quite small although the area between the 2 towns was rather like suburbs. We stayed at Ondangwa Rest Camp which looked very nice but the bar stayed open playing load music until 3 or 4am! Then building started next door at 6am. Not a good nights sleep.

We moved out quickly on Tuesday and headed for Rundu. The road was reasonable but not up to the standard of most Namibian gravel roads. The countryside is flat with lots of trees and shrubs between the occasional mealie field. The trees are becoming taller and the vegetation more dense the further east we go. We wild camped again Tuesday night about 50k from Rundu. It was a superb campsite with tall shady trees and meadow between, rather like being in a large garden. There was also a lavender type plant which helped to keep the flies away.

Rundu has an Internet cafe, unfortunately we could not use our laptop, so we sent off some e-mails and checked the bank accounts. After stocking up on food and beer we continued on to Divundu where we stayed at the Poppa Falls Resort for 2 nights to catch up on washing and re-organise the cab properly to use the laptop with the GPS.

I assume people say the Caprivi is beautiful because of the places they stay at. For us it was a long, straight, flat, tarred road. It may have been interesting though to stop and identify all the different types of trees that grow within a few hundred meters, there was quite a variety.