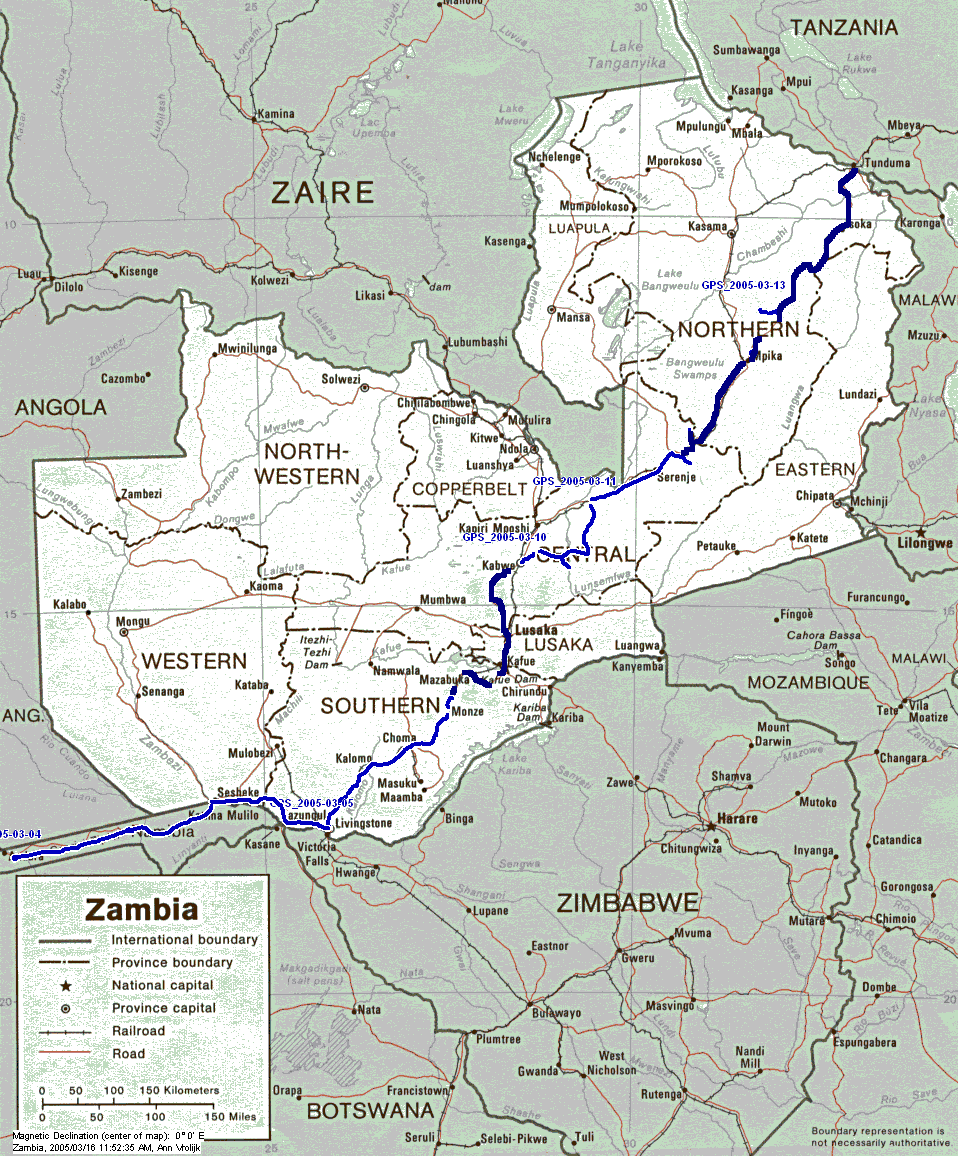 What is it about Zambia and the Vrolijks!

The last time we were here in July 1994 our car broke down in Mazabuka which caused no end of hassle but we met and stayed with Christopher Mwaanga. This time we had 3 separate incidents of theft from our vehicle in Lusaka, then an abortive attempt to find Lunsemfwa Falls, which do not exist, and met and stayed with Paul Young! I guess the good comes with the bad.

We had an easy border crossing, using our carnet for the first time, and spent the night at Maramba River Lodge. Their prices have just increased to USD10 pppn which we felt was quite expensive after Namibia. The campsite itself was very good though.

One of the first things you learn in Zambia is that everything is priced in US dollars. We are definitely out of the Rand region now.

Naturally we had to see Victoria Falls from the Zambian side. It is as spectacular as the Zimbabwe side, although less of it is visible. 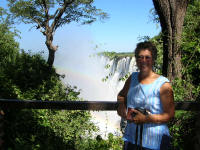 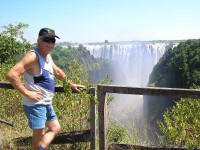 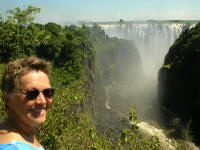 We were very impressed by the teams cleaning up all the rubbish along the road to the Falls. Then a cavalcade went past in black tinted windows.

The main road is good tar with no potholes. A vast improvement on the bad, potholed road we encountered in 1994. There are also small speed humps just before towns to remind you to slow down to 50 Kph. And there were road blocks, all to do with foot and mouth disease. Apparently it started in southern Zambia and the authorities are doing their best to contain it. We had to get out a few times to wash our hands, walk over disinfected mats and of course drive through disinfectant.

We stayed the night at The Moorings campsite near Monza, again going through the foot and mouth routine before we were allowed on the farm. 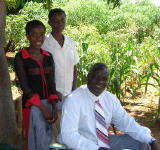 Today we called on our old friend Christopher Mwaanga in Mazabuka. We asked at the hospital where he was the Malaria Officer in 1994. They were very helpful and we finally tracked him down at church. We spent some time having coffee and a long chat with him. He has now retired, is a widower and has 2 children at home, The others are in Livingstone either married or following their careers.

We spent our time in Lusaka finalising details. On Monday we went into town to obtain our Tanzanian visas and do some shopping. We also discovered that Master Cards are not generally used. All the banks use Visa cards. The only place we could obtain money was from one branch of Barclays Bank using the credit card and then we could only draw USD200 per day.

Tuesday I finalised the write-up for Namibia and we again went into town to upload the website and catch up on e-mails. We counted 5 Internet cafes and the two we went into had about 20 seats each. Internet is obviously very popular. While we were in the internet cafe someone broke into the cab and stole our camera. This is the 3rd camera we have had stolen since last August! At least this time we only missed the photo of Pieter holding the beer glass.

We met Katherine and Sam from Creative Countries (Sam's website) at the campsite and spent quite some time talking about our various experiences. It is really great to share information.

We decided it was time to leave Lusaka, but first we had to buy a camera. The prices were up to double what you pay in SA. We also had cash problems because of the USD200 limit so we had to use some of our few US Dollars. We bought a Sony cyber-shot which is a good camera, but we feel the Nikkon was a better one.

I stayed in Grom while Pieter negotiated for a good deal. Both cab windows were open to keep cool and Pieter's glasses were taken from his seat!

We had also left the canopy windows open, someone carefully removed our towels through the small slot in the burglar proofing!

By now it was lunchtime and we were very happy to leave Lusaka. At about 4:30 we were in Kabwe and decided it was time to stop for the night. The only place we could find to camp was The Village. They allowed us to use our tent as they were fully booked with a conference on HIV/Aids but asked us to eat dinner at the restaurant. As we could order from the bar we decided to do so and have the Bream. It took over an hour to arrive but was absolutely delicious with large portions. In the meantime it was interesting to watch the locals socialising with each other. They spoke a mixture of English and the local language. The next morning we had breakfast with the owner, Phillip Sinyangwe. He is a friendly well informed person and was the Director of Prisons under Chiluba. He appears to be quite wealthy.

The idea of looking at waterfalls in Zambia seemed a good idea as there are many in the north west. After Victoria Falls, the next one on our Magellan map was Lunswemfa Fall east of Kabwe, so off we went. 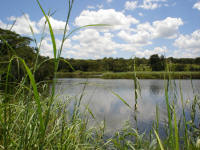 The road was really terrible at times because it is the end of the rainy season. There were lots of potholes full with water. Sometimes the potholes were filled with bricks which helped. To top it all, there were no falls, just a dam and power station. For me the only highlight of the day was that Pieter actually managed to unglue his hands from the steering wheel for a while and I drove part of the way. I have now driven over rough roads and am somewhat familiar with the gears.

I also had to drive on and off a ferry. We did not ask the name of the river. 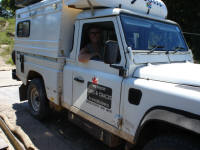 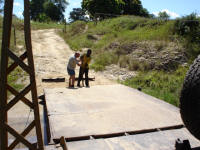 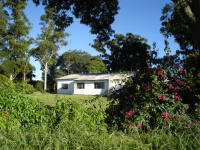 By 4:30 we were exhausted, but because the countryside was fairly heavily populated we did not want to camp wild. When we saw a sign for a farm, Pegasus Agvet, we decided to ask if we could camp there. The farm is owned by Paul and Coral Young. Paul was at home and not only allowed us to camp for the night but provided a bath, dinner, breakfast and wonderful conversation over a range of topics.

He also advised that the roads in the north east were probably impassable at this time of year and after the day's experience we felt we should rather move on to Tanzania. 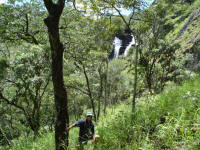 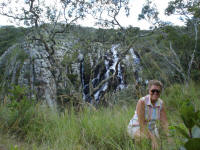 First stop was Kundalila Falls, only 14k from the main road. We certainly had some exercise clambering up and down over rocks. The falls are quite nice, much better than the pictures show and the view spectacular. 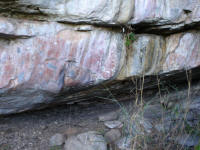 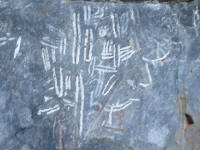 Next we visited Nsalu Caves. More exercise! Unfortunately there has been a lot of vandalism with people writing their names over the paintings. I assume the photo I have taken is of original paintings.

By now it was lunchtime and we wanted to get to Kapishya Lodge past Mpika so we had a quick lunch and headed east. Naturally it takes longer than you think and the journey had its downsides. Every now and again there would be a large pothole in the road. Usually they were avoidable until we came across one that was wider than the space between the tyres! Pieter had to swerve suddenly to the other side of the road to avoid it. We were very lucky there were no oncoming cars! Not only that but we had a puncture just on dark. We also took the opportunity to put in extra diesel. Then we discovered that Kapishya was 32k along a dirt road. We finally arrived at the lodge at 8:30pm (so much for our decision not to drive at night) and asked for the camp ground. Told it was just around the corner, we drove off. But when we had to cross a small stream and the front wheel spun freely providing a beautiful fountain in the headlights we decided it was time to stop. We set up camp nearby.

Next morning we found we were not that far from the actual campsite and moved over for a day of rest. The camp has flush toilets and hot showers but at USD10 pppn we felt it was expensive, especially compared to Eureka in Lusaka. However, it is apparently the best campsite in the north.

Sunday we headed for Tanzania. We first headed for what we thought was the office to pay for camping only to discover that we should have paid at the lodge 20k back. The office was for tours of Shiwa Ngandu, a large farmhouse on the same property. So we ended up not paying - our apologies to the management of Kapishya Lodge.

Finally we took a photo of the glass.

We had taken one in Lusaka, but had not downloaded it before the camera was stolen.