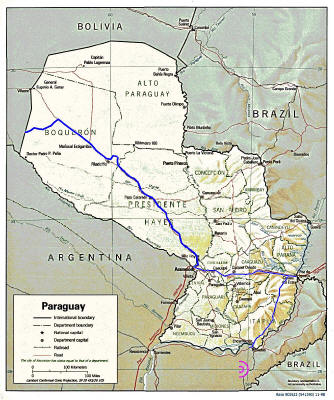 Then across the border.

Police the world over have places where the road signs are not logical. They use this to make money from fines. We got caught. Plenty of visibility, no oncoming traffic, up a hill, double yellow lines and a very slow truck. The policeman wanted USD 200. Now this is exorbitant! Pieter refused, the police kept his driver's license so we waited.  The result was a return to Encarnacion and a fine of USD 55, presumably the official rate.

The camp site is magnificent. Lots of grass and shade, clean modern well maintained ablutions with paper and soap, wash up facilities, electricity and wifi. A great place to catch up on washing etc. The local supermarket has a good selection as well - the German influence no doubt.

My father died on Tuesday, 5 days short of his 99th birthday. A blessed release for him. This is a lovely place to mourn 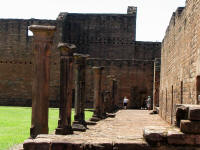 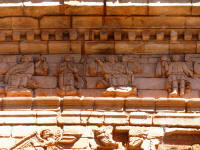 I went with a tour group to the Jesuit ruins nearby. They are very well preserved. Obviously they were not in the line of fire during the various wars. The most amazing thing was the extent of the structures and the length of occupation by the Jesuits. Trinidad was in use for about 60 years from 1700 to 1760, Jesus for just 5 years until the Jesuits were expelled.

A lively town full of people. The reason for coming is to buy a new computer. The first one we purchased did not live up to the specs given by the salesman. Most I could live with but not a 3 cell battery with about an hour of usage. The replacement cost a little more but has a 6 cell battery and 2Gb memory. A reasonable deal, nothing spectacular. 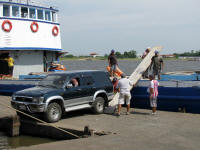 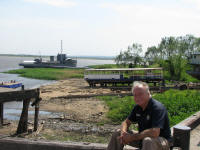 A big disappointment. We walked around the centre looking for brunch. There were no cafes, restaurants or small supermarkets. We ended up having coffee at a service station then walked down to the pier and watched a car being unloaded from a ferry. It was even more difficult than loading the Land Rover at Wadi Halfa in the Sudan. The driver was not very good which exacerbated the situation. He had to turn his car 90 degrees on a wharf about a meter longer than the car. At least the ferry was on one side. The other was a drop to the water.

The Museo Etnografico Andres Barbero was interesting. I particularly enjoyed seeing how the Indians used feathers. Besides general decoration on heads, waists hands and legs they were used to create masks for use in various rites.

This is a Mennonite centre. Mennonites are a Christian sect with a conservative culture. There are groups in Bolivia as well. However, unlike their Bolivian counterparts whose men wear dungarees and women wear long skirts, these people wear standard western clothing. As expected on Sunday nothing was open. 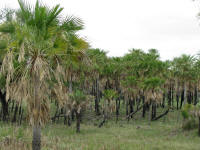 The Chaco is dry with green trees, maybe because it is spring. The Mennonites produce most of the dairy products for Paraguay so it can't be desert as some have suggested. The road is tarred and we made good time. That the border post is small, two offices and a small house. The customs officer had a problem with our car papers. Earlier at a police checkpoint we had been made aware that the car only had a 10 day visa. Now we were told we would have to return to Asuncion to sort the problem out. We had very little Paraguayan cash and insufficient diesel to do that. A closer town was suggested, only 200k away. We couldn't do that either. Eventually it was agreed that he would pass the car out BUT we could never bring that car back in. OK, not a problem. If the customs people in Encarnacion only want to give the car 10 days when we have 90 day visas, then we don't want to return anyway.

We asked where immigration was. It is about 100k into Bolivia. Strange that Paraguay immigration is so far into the next country. Or is it? Read on to see what happened.