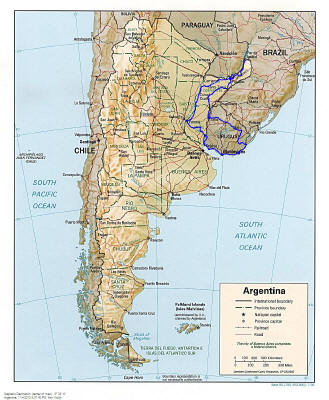 Rain, rain, go away, come again some other day. It did, occasionally.

We saw the falls during one of the dry periods. Personally I prefer the Brazilian side because you see the falls as a whole. In Argentina you get up close and personal. Right over the Devil's Mouth. It wouldn't take much to get sucked over. It is quite mesmerising watching that huge volume of water going over. You walk along the top of the rest of the falls. Again close up so you only see a side view. This can be spectacular. There are a lot more trails where you can go down and look up at the section of the falls that does not include the Devil's Mouth. I thoroughly enjoyed the day. Unfortunately Pieter had problems with the walking and only saw the Devil's Mouth. That is approximately a 2 kilometre walk just on its own.

Maybe people like the view they see first, best. There are many different opinions on which is better, Brazil or Argentina.

Then we sat out the rain once again, just as in Paraty in Brazil. 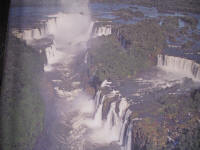 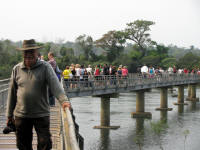 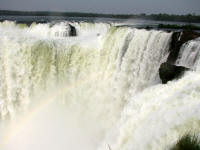 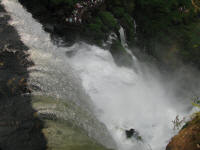 There is no real reason to stay in this town but the sun was shining brightly and there was a great laundry facility to hand wash the sheets and other large items. We also managed to dry out everything else. Everything was damp from all the rain.

We spent quite some time watching ants demolish some nartjie (mandarin) skin that had been thrown on the ground. It took about 24 hours but it all disappeared. They didn't touch the piece of tomato I left for them.

Our route took us on a big U to take in the green scenery of MIssiones Province. The green is made up of tea plantations (everyone drinks mate though), forestry plantations and what is left of the rain forest. As the poster said at Iguazu, two thousand shades of green. The Aurocaria Angustifolia, a modern cousin of the Monkey Puzzle Tree,  and the inevitable Pine Trees are cultivated in the forestry plantations.

Missiones takes its name from the Jesuit Missions set up during the 17th century. There were 30 on the plains covering this part of South America. In Missiones four of these are open to the public. There are only ruins left, the buildings having been razed during various wars. The 2 we visited were San Ignacio Mini (1632) and Santa Ana (1660). San Ignacio Mini still has part of the church entrance standing and this is used on the pamphlets to denote the missions. The museum was worthwhile. It included recordings of the music sung and played at the missions. I laughed at one caption which said that the missions attempted to impose humanist European cultural values while keeping those customs that they deemed proper. At the time humane treatment was NOT part of European society unless you were rich of course. If you were a peasant I doubt you saw much humane treatment. I also do not believe that women are basically stupid and good only for housework and child-bearing - a very Christian view at the time. The missions did provide some security from the slave hunters and other bandits. The Jesuits learned Guarani and allowed a certain amount of Guarani culture to survive. 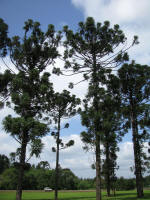 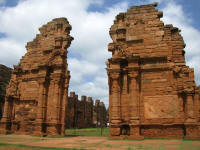 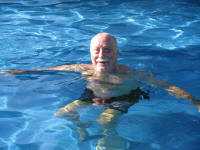 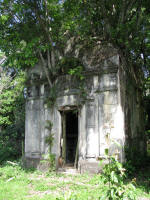 We met Jeff and Rose, both mature travelers, at the Youth Hostel. They have been traveling off and on for 20 years taking photos and selling them. Currently they are on an extended bike trip through South America. I could not have done that 10 years ago. 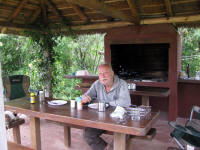 What a lovely place. The camp site is magnificent, the best we have come across. There are several pagodas with a fire place, electricity, water, table and benches and a wash line at the back. The rest is grassed with gravel road and several parking areas right next to the grass. The showers were hot. All of it is relatively new. We went to bed with a lullaby from the frogs and woke up to bird song. What more could you want for camping. Wifi perhaps, but there was no cell phone connection either.

Then there were the birds which came to visit. The camp ground is on Largo Ibera and near Reserva Natural del Ibera. I went on the 2 short walks through the park. The monkey trail was the best. I even saw a howler monkey. As I was approaching I heard what seemed like a monkey fight but by the time I arrived it was over and the monkeys had dispersed. The path goes through a small patch of preserved rain forest. I had been looking at some of the plants and turned around to be faced by a deer. She had a little one with her but decided I was no threat and went back to grazing. Lovely.

I managed a good photo of the local Piet-me-vrou. It is called a 'pete-away' in Guarani and Great Kiskadee in English. 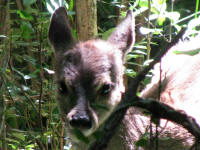 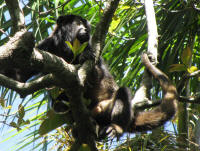 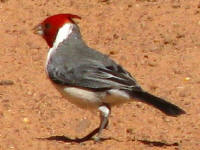 On Ruta 14 we went through the notorious police check at K341 in Entre Rios. The police in Entre Rios have a reputation for corruption and look for reasons to impose a fine - without a receipt naturally. Maybe too many tourists are wise these days. We were stopped and a half hearted attempt was made to have the tow bar removed as it is supposed to be dangerous. Pieter just shrugged his shoulders and said customs was happy with it in Buenos Aires. We were sent on our way.

We stopped at a country shop on the way and found some really nice cheese. It is difficult to find cheese we like. Most cheeses are soft and bland so we were happy to find some we liked.

Then the troubles started. There was a huge unmarked dip in the road. I hit my head on the roof and came down fast. The result was a very sore neck and shoulder muscles. We went into town to find the free camping on the beach, Sorry, no longer allowed. Next to the tourist Information for other campsites. Back to the Club de Pesca. Sorry they don't allow camping here anymore except at Easter. It was getting late so we had some dinner in town then headed for the campground near the bridge into Uruguay. It was closed! We ended up camping just across the road on some lovely soft grass. The police came around about 10pm to check us out and were happy with the situation as long as it was only for one night.

Finally the springs have been fixed. Going over bumps is no longer a cause for concern. The brakes and a few other small concerns with the car have been taken care of. And we have gas. We actually ran out on Friday and after chasing around found a place to fill up. Great, we could cook dinner. These were the things that kept us in Parana for 5 days.

The municipal campsite was not officially open but there was off cold showers and ablutions that were clean but definitely not maintained. Plenty of dogs. They adopted us and guarded us at night. Quite startling when they bark in your ear when you are deep asleep. One mother was weaning 7 pups. By the time we left all the puppies had found new homes. Obviously word had gone around because people came and just picked them up.

I turned 21 for the third time on Friday and decided I wanted a massage for my birthday present. La Paz has hot springs right by the river. They are not bad but have a long way to go to catch up on Warmbaths in South Africa. The massage was worth every cent.

We intended to leave on Friday but after a balmy Thursday the rain came down. We ended up sitting it out in a service station, warm with food on tap and wifi.

We headed for Posadas and the border to Paraguay. It is too long a journey for one day and we ended up camping in a tree plantation. Beautifully quiet and a small campfire.

The trouble it took to find camping! We were told the camp ground was under water, another may have had camping but no longer, the best was 35 kilometers away. On the way out we saw an open tourist information office. They said we could camp on the Parque del Cuidad near the airport, much closer. They were right. No showers but nice grass. Everyone was out for a Sunday picnic. When they left there were only 2 families left. Quiet but not the place to stay for an extended period.

It was a very busy morning, finding the Paraguayan Consulate, changing money into dollars, getting photocopies, signing forms and then waiting an hour for my visa. My finger print was taken before I was actually given the visa. Pieter doesn't need one thanks heavens.

Then across the border.