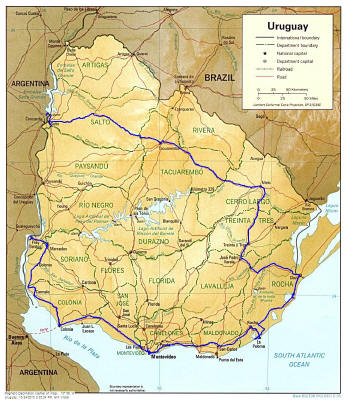 The border was easy until we came to leave! Customs checked the car. Cheese, fresh fruit and vegetables and meat cannot be taken into Uruguay! I was furious. We had only just bought the cheese and oranges! In all it was about half a day's budget, not nice. Of course I should have done some homework by reading up other traveller's logs or checking on import details. Bur still - I was furious.

We stayed near the Dayman thermal resort for a few days to recoup the budget and housekeep after the dusty, muddy roads around Carlos Pelligrini. An ongoing effort. The Condor lets in much more dust than the Land Rover, probably because there is less ground clearance.

A journey through green rolling hills of cattle and crops on a well repaired tar road to a lovely campsite under a bridge near a river and a small campfire. Rheas are a very common sight, grazing with the cattle. 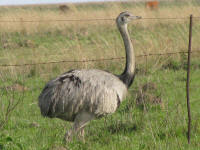 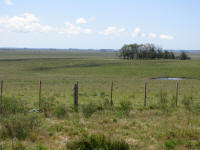 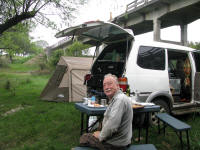 We could so easily have gone back into Brazil as Chuy is a border town full of Brazilian goods - tax free. We were able to buy some familiar items, particularly proper bacon. Of course there was a customs point outside the town. I was horrified at the thought they would confiscate the items we had just purchased! They believed us though and we were passed through.

The destination was supposed to be Punta del Diablo. Unfortunately the camp ground was closed and we ended up at the only national park in Uruguay, Santa Teresa. Beautiful beaches, lots of birds, hot showers and a forest of firewood. This time we had a large campfire every night. to start with the weather is not very kind, cold and overcast but it did improve. We met, and shared stories with Dave and Rose another couple of long term travellers. We have met some of the same people they have such as Walter in Islamabad. Small world.

Punta Diablo is very picturesque, even on a grey day. It must be lovely during summer when there are people about and all the shops are open. The Fort (1762) nearby has well preserved walls but not much else. 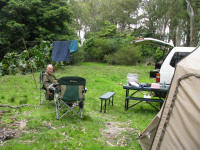 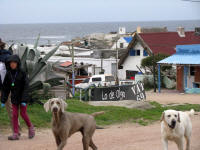 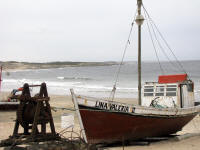 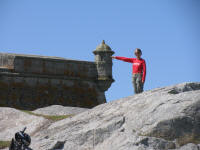 What a day!!! It started beautifully. We headed south along route 10 right next to the sea. At La Paloma we lost the route but the maps we had said it was there, right between the coast and the Rocha Lagoon. We assumed we were just a little bit lost and continued expecting to come across it at any moment. The road became a track but we pressed on. The lagoon area is quite magical with horses, old houses, fishing boats and lots of birds.

The track went over the sand. No problem we have 4x4. Except one wheel stopped working suddenly and we dug in. Out with the sand ladders and spade. This of course was when we realised one front wheel was not working. OK we still have the back wheels with sand ladders. Then one of the back wheels decided to stop. Now we only had a standard 2x4 car! Digging just didn't help. The Lagoon police saw us on the sand and came to tell us to get off it as this was not allowed. Yes, well, no fine. The police tried to get us out, without success. We ended up waiting for professionals to tow us out. Except they only brought 2 planks of wood and a jack which didn't work in a car that should not be allowed on the road! BUT they did get us out. They raised the two front wheels bit by bit using our jack and packing sand underneath. Eventually planks were placed under the front tyres. Now all the tyres had something to provide traction and Pieter was able to reverse onto more solid ground.

We ended up spending the night at a nearby campground in a field of lovely white flowers - onion weed! At least the showers were hot. 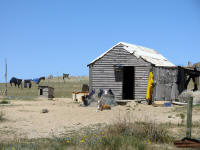 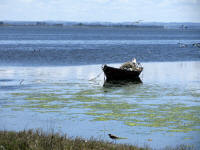 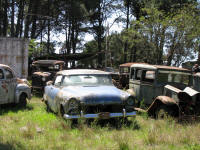 There is a campsite about 30k from the city. Naturally closed until summer. We went to the next one back, 40k from the city. The kindest thing to say is that it is being renovated. We did have water and electricity though. The ablutions were useless.

We are staying in a hostel in an old house right near the centre. It is a small city with very little of interest, welcoming though. The people at the hostel were great and we ended up staying for 9 nights. Mainly because we decided to rethink our options. The weather is still cold at night and it rains occasionally. A tent is a great option in good weather but not in cold weather. Even a tent on top would make very little difference. There is also a consideration about where we will end up eventually. We have always wanted a camper van but have limited ourselves to buying a car in South Africa where what we want is just not available. Finally after 5.5 years we have widened our horizons. We will buy a vehicle anywhere in the world. All we have to do is sell our current car and fly to where the new vehicle is. Sounds easy. Pieter spent many hours on the internet researching and we are getting closer to deciding exactly what we want. One thing for sure, no more compromises. We will either get the right vehicle or keep what we have. This affects our short term plans as well. We will head towards warmer weather. Antarctica will have to wait for another year. I might even spend time learning Spanish!

I was in time to watch the changing of the guards on the Friday. I didn't bother with the guards so much as the brass band. They marched to Plaza Constitucion, played some tunes and then marched back again. I liked their uniforms, blue with red trim, swords, tassels and spurs on the boots and cylindrical hats.

The Sunday Market was interesting. Lots of old things - other peoples junk is someone's treasure. Mate was everywhere. So many people walk around with a thermos under one arm and mate in the other. Just like in north east Argentina. 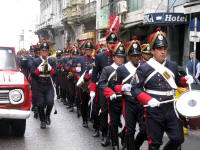 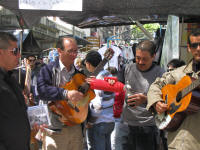 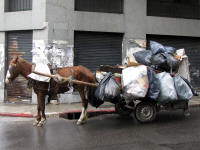 I expected us to stay in Colonia del Sacramento for a few days. It is a quaint old town, again very small. We had lunch at a restaurant on the river and watched the LBJs (Little Brown Jobs - i.e. small birds) fight for bread crumbs. Some were very clever and caught the crumbs in the air. 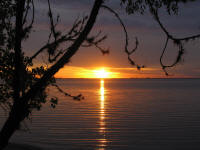 The town didn't seem sufficiently interesting so on we went. Mercedes has a campsite on an island which you have to walk to, unsuitable for us. We ended up at Fray Bentos on the border with Argentina. Quite strange to stay in a town with the name of a meat paste. The campground was basically closed so we pitched our tent close to the only open ablutions. At least there was water there for the rest, bushes are better. Just before dusk we were told we could not camp there on the river but it would be OK for 1 night. It was lovely watching the sun go down.

My thoughts on Uruguay are mixed. There are some wonderful people.  A great place to go to the beach or drive through rolling green hills. BUT.  Diesel is expensive, we met with some scams which left a sour taste and the camp grounds left much to be desired.