When in Helsinki, I thought we had arrived in a city with really attractive girls: self-assured, blond and slim, they were a most welcome part of the scenery. Much more so than the girls in Spain, even France and certainly England and, to a lesser extend, Holland. They actually compared favorably to the girls in Cape Town.

And then we saw St Petersburg in Russia. 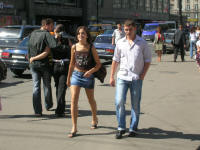 Let me first tell you about the city. It houses about 4,5 million people, and a large number of them are engaged in work concerning the tourism trade. To say that St Petersburg is a tourist’s paradise would not be short of the truth. The ambiance created by the splendor of impressive buildings, the number of palaces and musea, the wide avenues, canals and spacious parks all form a harmonious facet of the city. There are no imploded sites, no excavations where new, ‘modern’ office blocks or apartments will be built. Only on the outskirts of the city one will find large, modern shopping centers with an assortment of shops and restaurants that can compare with western cities that never knew communism in their past. There are no parking meters to be found anywhere, no parking restrictions and no parking attendants. We camped in parks, side streets and on a square, all without hassle or undue attention. 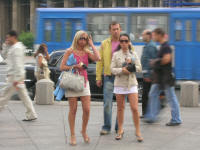 concerts and exhibitions. The one most impressive museum of all, the Hermitage that used to be the Winter palace, is a  treasure trove of a magnitude only known to those who have an insight into the true extent of the value it’s numerous rooms and cellars contain. We loved it all: the freedom of movement, the quality of food and drink, friendliness and easy access to the internet in many public places. Only the trams and trolley buses that are an important part of the public transport system carry the memory of communist days. They seem to be sent to the scrap yard to be recycled: some crude bodywork and a new coat of paint (by hand), a repair job on the seats and electric power plant and hey-presto, they are good for another number of years. And it’s obvious not every Petersburger has his own car: walking is a normal part of daily life. On entering Russia from Finland though, we saw numerous car transporters heading East, and in Petersburg we saw the latest  Mercedesses, BMW's and Land Rovers, together for instance with a unique Humvee stretch limousine!!

And so we come to the subject this contribution to our website is dedicated to: the girls of Sankt Peterburg. No-where in Europe have we seen such an exuberance of romantic life as here: couples walking together, roller skate hand-in-hand, having conversations on benches, street corners and side-walks. Kissing and hugging without shame is a normal sight and with very few girls and women being over-weight, the show of shapely legs under mini skirts and hot-pants is an added delight. It is actually amazing what this aspect can do to an already attractive town! Wonderful!!!

First impressions of Russia are that the roads are not too bad but could be improved and there is quite a lot of rubbish along the sides. The driving is very much along African lines with U turns on busy streets, driving up the wrong way, reversing against the traffic and speeding along narrow highways. Pedestrians take their life in their hands. St Petersburg has lovely cakes, millions of happy, slim, well dressed and interested people, millions of tourists most of them Russian, boat trips along the canals with Russian speaking guides and a very few male beggars in army uniform.

With only 5 days, two taken up with entering and exiting the country we did not have time to do real justice to all the more than 100 musea and 20 odd events in St Petersburg. We visited the Hermitage, the Colonnade of St. Isaacs Cathedral, the Ethnic Museum, the JazzQ2006 festival and walked for ever passing by other musea and activities. 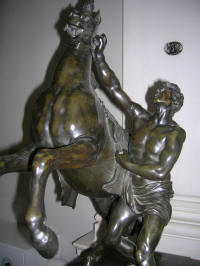 The Hermitage is impressive. It started as the Winter Palace of Catherine the Great in the mid 18th century and was used by the Tsars from then on. There are IBM computers at the entrance where you choose the type of tour you are interested in (highlights, art, furniture etc), you are then shown the route you must take with an option to print. The art tour covers most of the floor space. It takes 3 hours to see all the paintings starting from 13th century Italian art to modern art. There were many works by Renoir, Cezanne, Gauguin, Monet, Pizarro, van Gogh, Rembrandt, Jacob Backer, El Greco and van Rijn amoung others. We skipped some of it and saw other exhibitions along the way. The interior itself is magnificent Walls are sculptured and painted in many colours or covered with marble (green, orange, brown and blue) or granite. The doors are decorated with gold leaf. The ceilings are sculptured, painted and have gold leaf. The floors are mosaic or inlaid wood in magnificent patterns. Everywhere is decorated with additional sculptures in corners and at the tops of stairs, fantastic to see but for me a bit much to actually live with. 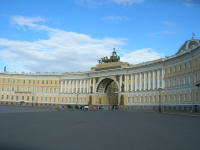 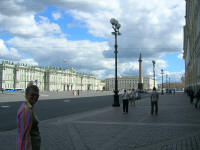 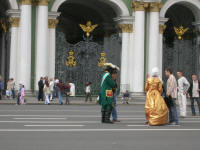 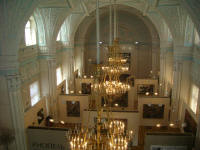 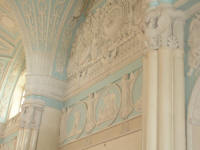 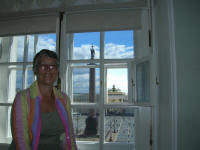 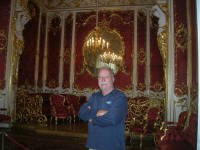 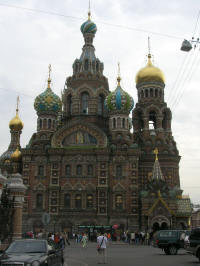 Our Saviour of the Blood Church was completed in 1907 on the site of the assassination of Tsar Alexander ll in 1881. It is an example of the Russian Revival Style with extensive mosaics on the outside and a nearby souvenir market for the thousands of tourists. 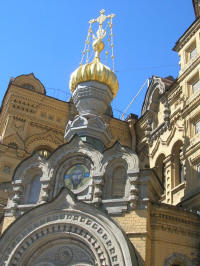 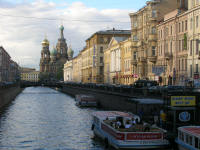 A working church in the process of renovation. The paintings on the ceilings and walls inside are being restored. 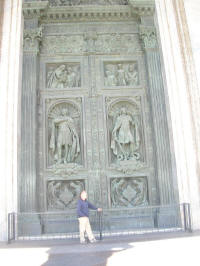 The Church of St Isaac has many icons. However we skipped the museum and only went to the Colonnade. Unfortunately we only realised that it was at the top of the church after we went in. Our climbing exercise for the day! 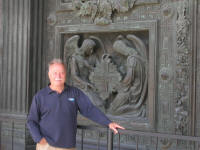 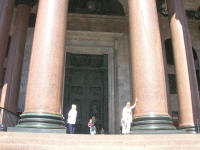 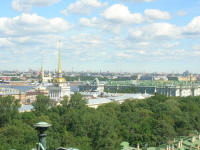 Pieter skipped the Museum of Ethnography but I love looking at the clothing and lives of people. The museum houses a collection covering over 150 different peoples in the Russia of the 19th and early 20th centuries, from the Rus in the west to the peoples of the far east. The influence of religion is obvious with Christians in the west, Muslims in the central south, animists in the cold northern parts and Buddhists in the west. Clothing is made from cotton, linen, fur, animal skins, wool, felt and fish skins (light, durable and waterproof). They all have layers of clothes and hats no doubt due to the long cold winters most of the USSR experience.

The JazzQ2006 festival was a disappointment. The price was very high so we joined lots of Russians sitting on the grass outside where you could clearly hear the music. They had some jazz to start with then went on to what sounded like South American Indian music followed by music with a VERY load base. That is when we decided to leave with gratitude that we had not paid to listen to the music. 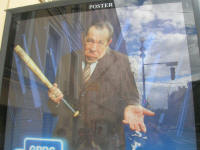 We did not meet any mafia but we did meet the police. They are on the lookout for traffic violations. The driver is pulled over and the situation discussed and resolved with a present. Of course when the vehicle is foreign the present starts a lot higher. We managed to get caught 3 times and only paid a hefty fine (USD 150) once. The other times Pieter said rouble, they heard dollars but ruefully accepted roubles.

A city of lovers 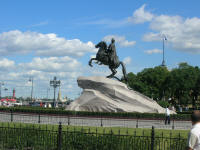 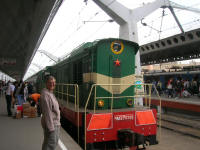 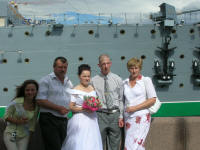 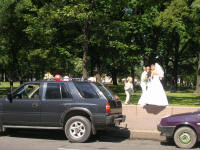