Some general comments about the Baltic States: 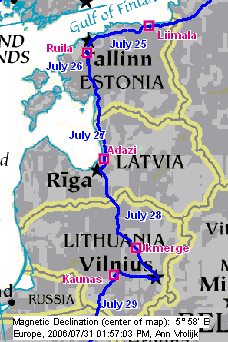 The roads in all the Baltic states are being improved with the financial assistance of the EU. The countryside is flat with ploughed fields and stands of trees. Lakes are used for swimming where and whenever possible. The further south you go the less well maintained the farm houses are but there seems to be plenty of money for new cars and good clothes. They are not as well off as western Europe but they are not poor by African standards.

Border control is minimal, but it is there. My Australian passport had to be stamped in but not out! As usual, except for the first two nights we camped by the roadside.

We stopped for the night  at a camp ground halfway to Tallinn to sort out the usual chores. It was a nice, quiet campsite with all the conveniences including a beach but no showers. There was a sauna instead. It was lovely and I really felt clean afterwards. It was in a wooden hut with 2 rooms. The first room had a table and chairs and the stove to heat water. The second room was the sauna. There were benches to sit on and both hot and cold water. After sweating nicely you could wash down with water at the right temperature for yourself.

The mosquitoes were back in force. 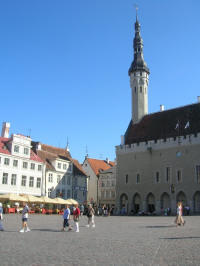 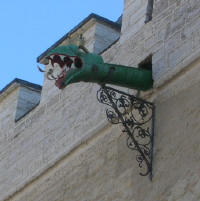 The old town in Tallinn makes the most of its medieval origins with restored buildings and waiters and waitresses dressed in the period clothes. It has a lovely atmosphere, casual, courteous and friendly. Pieter watched the tourists go by while I sat in a bookstore finalising the website for Russia. A Hari Krishna group of 4 went by beating a drum and chanting, using a megaphone for effect. It is many years since either of us have seen such a group, I had thought they were no longer around.

Today was the day we finally ran out of gas for cooking. We are now using the butane gas stove using small cylinders that we bought in Porvoo as a back up. This means quick meals (tins!) and cold water for washing both dishes and bodies. At least the weather is much warmer. We will be spending time looking for gas in every country until Holland where we know we can replace. Unfortunately there is absolutely no standard for gas canisters and valves anywhere we have been in our travels so far. We will look out for a stove that uses petrol (a Coleman, most probably) as petrol is available everywhere. The other option is LPG. 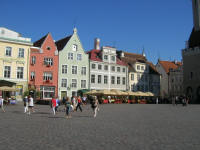 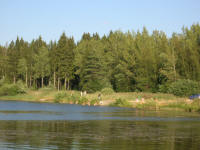 After leaving Tallinn we wanted to find a place for the night again. There is never a doubt on our mind that we will find a pleasant, secluded spot where we feel at ease and secure. It may well be that our long spell of traveling has something to do with it. It's almost been one and a half years that we have been on the road! We went along a side road to try and find a nice spot. Eventually we came across an informal parking area alongside a lake with quite a lot of people swimming. They came and went until dark, obviously enjoying the water. Apparently there is a heat wave in Europe at the moment so the water was doubly refreshing. Still too cold for me though, rather like the sea at Cape Town. 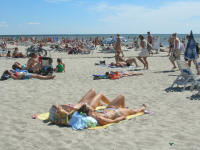 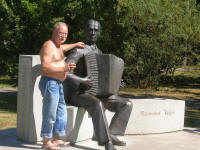 Parnu is noted for its beach on the Baltic. The water has very little salt in it and is shallow for a long, long way. Even so it is crowded with holiday makers. One end of the beach is for women only so they can strip and sunbathe in the nude. I had a look to report back to Pieter on the shape of the young women. Unfortunately the only ones I saw fully nude were over 40. The youngsters kept the bottoms on. 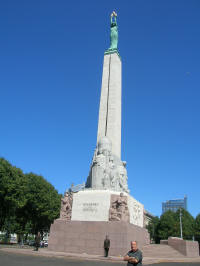 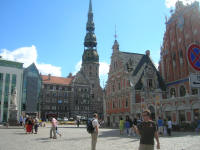 Riga old town is not very impressive, perhaps we are getting blasé. The main tourist site is the Freedom Monument, affectionately known as Milda. The woman is holding aloft 3 stars representing the 3 regions of Latvia. It was dedicated in 1935 during a brief period of independence. It survived the Russian occupation by masquerading as representing the 3 Baltic States being supported by Mother Russia. There is a guard of honour showing its importance to Latvians. The monument to the heroes of World War II is more impressive. 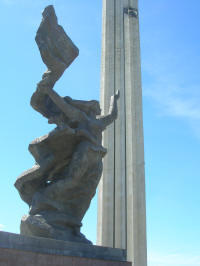 Tonight we camped by the side of the highway and by another lake. People would drive up, hop out, change into their swimming costumes using car doors for some privacy, swim for maybe 15 minutes, return, take off the wet clothes, put on dry clothes and drive off. I guess the costumes are always in the car for use when the opportunity presents itself. One truck driver also took his soap along and washed his hair and body thoroughly. 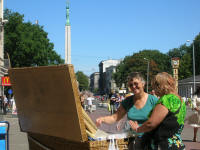 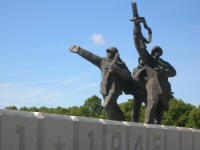 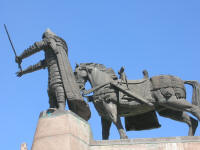 Vilnius has the largest Old Town in Europe, certainly good for exercise.  It is the most impressive old town of the Baltic States. The most popular sport appears to be gambling, there are Casinos everywhere. There are also many churches, in fact the first thing we noticed was the number of street sellers with icons and other religious artifacts for sale. We entered by the Gate of Dawn where a chapel was built into the gate in 1671 and meandered along the streets until we came to the castle. 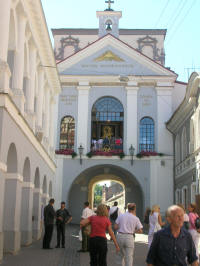 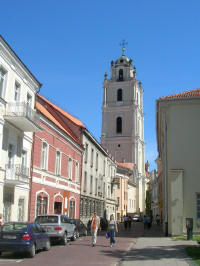 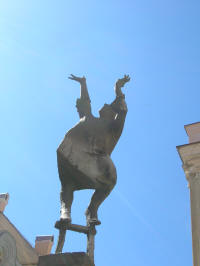 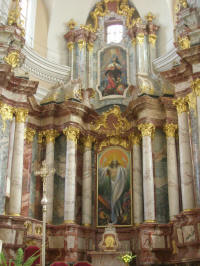 Kaunas also has its old town. We spent a very interesting night on the Town Hall Square. Friday must be a day for marriages as there were many bridal parties coming to the Town Hall. Some had just been married in a nearby church and presumably had to also be married by the state. They came in their stretch limousines with bridesmaids in each party in similar colours but no two dresses alike. The best men had sashes across their chests. In an earlier comment I mentioned the size of stretch limo's (8 side windows this time) and the appearance of a Hummer stretch limo. This time there was another one and I was able to take a picture of the interior. The splendor was overwhelming. And that for a car that's based on a military vehicle. Imagine what could be done with a 6x6!!

A bride-to-be and her entourage of women also came around asking for money to set up house. She must have had plenty of girl friends to help her and not only that. They were real good looking girls and once again it's amazing what a couple of nice legs can do to a girl! They took plenty of photos and clapped when she was given money. We gave her all the coins we had. A different type of girls night out.

Tired of tinned food, dinner was at a restaurant. At street level there was a door and a set of very steep stairs going down into a cellar. The restaurant itself had rough stone walls and very nice meals at a reasonable price for people spending SA Rands. While we were dining a German man came down, videoed his son descending the steps, videoed the interior of the restaurant without any commentary, then left. I am very glad I do not have to sit through his holiday videos! I do hope he edits them before he invites his friends around. 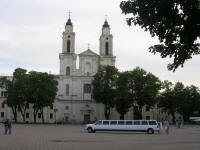 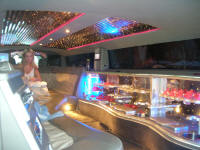 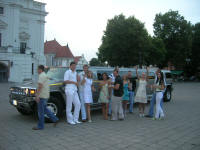 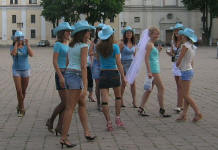