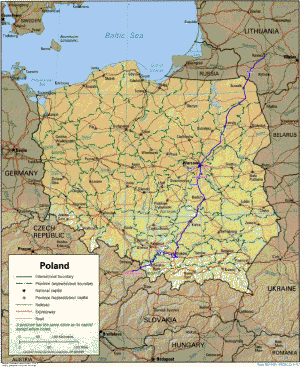 There is a very convenient camp ground very close to the centre of Warsaw. By Monday evening it was time to take in some sights and have a meal out. We took the tram into the centre and found a nice restaurant where we could watch the world go by. This morning we took in the sights. The old town has typical buildings with narrow streets. It has been almost completely rebuilt after the devastation of WWll. Buildings from other towns were specifically demolished to provide historically correct building material. The churches we entered had plain painted walls and ceilings with elaborate alters. The old city is now a UNESCO World Heritage sight as a tribute to the authenticity of its restoration. It may be this or it could be the newness of the old city but the vibrancy and soul has gone. I think it would be correct to say that the commercialization, aimed at the tourist trade, has a lot to do with that as well

August 1 is a special day in Warsaw. In 1944 the people rose against the Nazis. The uprising was expected to last 2 or 3 days but ended up lasting 63 days. It was sanctioned by the Polish Government in exile in London and allied planes dropped leaflets on the city about the uprising. Each year this is celebrated by a bomber flying over dropping leaflets. There is also an air raid siren and bells pealing at 5pm when everyone stops and observes a minute of silence in remembrance. The city is dotted with memorial plaques to those who died on that particular spot. Many of these had floral tributes nearby.

The road system is difficult to navigate. There are myriads of one way streets, dead ends and pedestrianised streets. It took 3 attempts before we finally arrived at the old city and parked, something very unusual for us. Even finding the highway to Krakow was a challenge as we found one sign to Krakow, then the road headed in a different direction. Our trusty GPS came in handy though as by heading south we eventually found our way out. 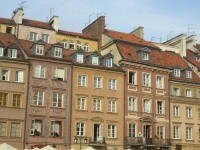 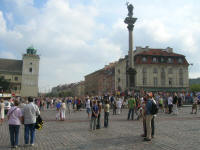 In contrast to Warsaw, Krakow was not devastated during the war and has lots of life. We arrived in the middle of a cycle race which ended in the Old City Square. Unlike Warsaw we were in the middle of the Old City before we realized it and became caught on the edge of the main square with no way forward or back, so we parked and walked. We had to wait until after dark for the roads to be cleared and once again ate in a restaurant. It is cheap to eat out here and with limited cooking gas its a lovely alternative. The restaurants provide all types of meals and deserts. One specializes in ice cream with the most magnificent variety. Gorgeous!

It was after dark when we moved from the Old City Square and we chose the wrong place to park on Wednesday night. It was near a busy road with trams and cars and a railway line nearby. The local market set up nearby with much noisy unloading of beer cags in the early hours of the morning. The market was interesting though. It is the first time I have seen ripe sunflower heads for sale.

We had read about a tour based on the "Schindler's List" movie and decided to go on it. While waiting for the tour to start we walked around Kazimierz, the original Jewish quarter. In 1495 the Jews were moved here from Krakow, which in those days was confined to the top of a hill. Kazimierz has many museums and memorials to the Jews. An interesting one was the Galicja Museum. This contains photos of the relics of Jewish life and culture that can still be seen today in Polish Galicia. It includes photos and stories of some of the people who have been given the title of the 'Righteous amoung Nations'. These are people who put their own lives at risk to help others.

The Schindler's List tour provided an interesting view of history. Eva, our guide was very knowledgeable about the area and the sufferings of the Jewish population. We were shown the places where scenes from the movie were filmed and the history behind the movie. The tour ended at the memorial to all the people (Jewish, Polish and Romany) who were interred in the Plazow concentration camp. The memorial shows 5 people with heads bowed and a crack across the heart area. The crack symbolises broken hearts or broken backs of either the Jews or the Polish Nation, depending on the viewers perspective. Interestingly most of the Jews from Krakow were persuaded to go to Lublin and ended up being exterminated there. Schindler has been awarded the title of 'Righteous amoung Nations'. 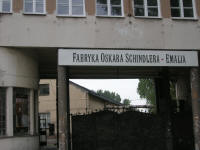 Friday was devoted to seeing the Old City and Castle. The Wawel castle complex has many museums including the Cathedral where Pope John Paul ll was Archbishop. Entrance to the various museums is regulated. There are only a limited number of tickets available each day and each ticket has a given time slot for entry. We were unaware of this and by the time we arrived (we are never early) we could only obtain tickets to the State Rooms. These are very grand with marble floors, stairs and stair rails, valuable Persian carpets, painting and tapestries. Some of the walls are covered with 'cordovan' a material like wall paper, very rich and dark. The cathedral is unregulated. The crypt is extensive and holds the tombs of the royal family. Polish tourists were very interested in the stories behind the tombs. 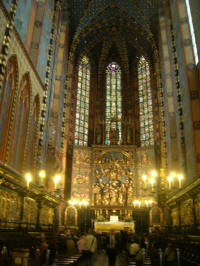 The Old City is built around a square with the old Cloth Hall at the centre. This is now the home of many small stalls hawking crafts rather than cloth. The edges of the square are lined with restaurants, all busy, although an amazing number of people eat while walking around.

The gothic church of St Mary stands to one side. The ceiling is painted in deep blue with gold stars. The centre piece is the 500 year old wooden alter carved by Veit Stoss in the years 1477 to 1489. It is the largest alter of its kind in Europe. The carved figures are about 2.7 meters high and display the joy and sufferings of St Mary. The wings of the cabinet can close with 12 scenes carved on the outside. No wonder it took 12 years to carve. 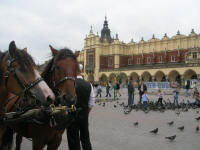 The Polish are mainly Roman Catholic. Their fervor shows in the well tended cemeteries and the shrines that are to be found on the outskirts of almost every village. There are many unfinished houses being lived in, a sign of growing prosperity? Some houses are roofed in tar paper though, a sign of lack of money? The roads in the rural areas can be poor, although pot holes are generally filled. The main roads can have deep ruts caused by heavy trucks and warm weather.

We did not visit Auschwitz-Birkenau, although we passed by. I have been before and found it a depressing emotional experience. Pieter agreed.

Summer seems to be over. The wheat crops are in, the leaves are starting to turn and it is colder and rainy. I feel like I only had 3 weeks of summer!